Do you have the January blues? You know what I mean – the holidays have come and gone, with the next major holiday not until Memorial Day in May (unless you’re one of the lucky ones who gets Presidents’ Day off); the weather is dreary and cold; your New Year’s resolution of eating healthier is starting to get boring…time for some inspiration and comfort to get you through the winter blues.

One thing January has going for it is that it’s National Oatmeal Month. Now, oatmeal isn’t much to look at – it IS pretty blah on its own – but it’s a nutritional powerhouse that’s just begging to be dressed up with other nutritious ingredients. 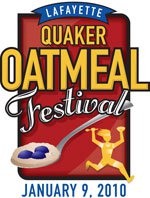 Near where I used to live in Colorado, there is an annual Oatmeal Festival. The event kicks off with a 5K race and ends with a health fair, cooking contest and perhaps the world’s largest oatmeal topping bar. At this breakfast you can top your oatmeal with the usual fruit and nuts, but among the offerings as well are M&Ms, peanut butter, gummy bears and jelly beans. Perhaps not the healthiest way to prepare this breakfast dish but, hey – those folks just ran 3 miles! And besides, anything that gets people to try a healthy dish they might not otherwise is considered a win in my book.

There are many reasons to love oatmeal:

Back in my pre-kids days when I ran marathons, a packet of oatmeal (plus coffee and an orange) was my standard breakfast before long runs and races. The packets and oatmeal-to-go dishes were perfect for out-of-state races – I’d just heat some water in the hotel room coffeepot, mix and go. That, and when I travel is perhaps the only time I can tolerate the pre-packaged oatmeal. I find it’s a little too sweet for me, and I prefer the texture of old-fashioned oats (instant oats are chopped smaller to make them cook faster).

I guess I can be a little picky about my oatmeal, since I almost never order it at restaurants and would rather make it myself. I like using milk – but not too much or it won’t cook as well. Also nuts – but they must be coarsely chopped as slivered won’t give the same result. And must have berries mixed in – bananas, raisins and other toppings just aren’t as good. I use frozen berries throughout the winter and fresh berries when they’re in season. The result is a filling meal loaded with about one-third of my daily fiber and calcium needs, and is loaded with iron, a mineral that most pregnant women and women of childbearing age need. (Helpful hint: iron is better absorbed when you pair it with vitamin C, which the berries provide!)

*If you’re using fresh berries, add after the oatmeal is done cooking.