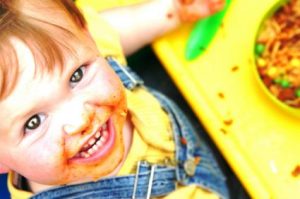 I’m a huge proponent of eating together as a family – especially when there are young children around. I know too many families who make a quick meal for the kiddos, then sit down later for their own dinner after the young ones have gone to bed. The excuse I often hear is that it just takes too much time to get a meal whipped up for everyone. It just doesn’t make sense to me – aren’t those people taking up MORE time by making two meals? If not, what are those kids eating?

Parents are powerful role models for their children. I can’t even tell you how many families come in for counseling on “picky eating” in their toddlers, only to hear that daddy won’t eat vegetables or that instead of sitting down herself mommy just picks off the kids’ plates. We’re conditioned to think that kids will only eat bland, “kiddie” food such as macaroni and cheese, hot dogs and french fries, but that is simply not true. And while kids are notoriously finicky, I find that pickiness at the table is less of a function of the kid not liking what’s in front of him or her, but rather because that kid has been fed snacks throughout the day and simply isn’t hungry. Or because that kid is accustomed to getting what he/she wants if he asks (ok, whines) for it long enough.

Here are some tips to bring back family-style dining to your home: